RSS Feed
← How to Eat a Cupcake {featuring London}
Our Home: The School Room → 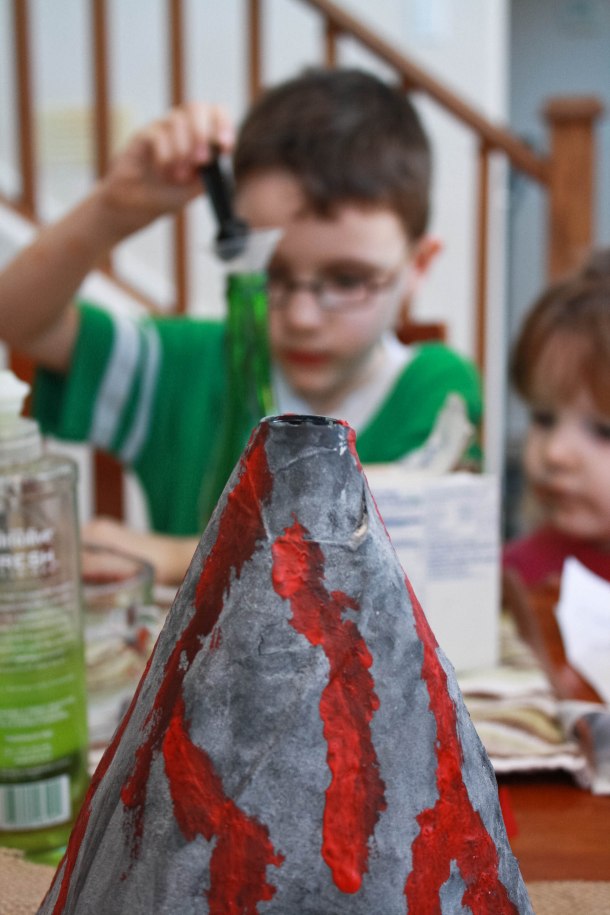 Science has been one of our favorite subjects this year. We started off with Human Anatomy and loved it, but after 14 weeks of that we decided we wanted to take a break and learn about other things. So, I’ve just been doing unit studies of various things he is interested in, or things I knew he would be learning around his grade level according to state standards.

Last year for his birthday, he received a Young Scientist Club kit from Gramma and Papa. These kits are AWESOME! Each kit contains three separate units and experiments to go along with them. So, the past few weeks we have been studying the states of matter, weather stations, and volcanoes. Can you guess what his favorite was? 😉

First, we had to build our volcano from paper mache. I haven’t used paper mache since the fourth grade, and as we were doing the project I realized why. Messy. Sticky. Takes forever to dry. 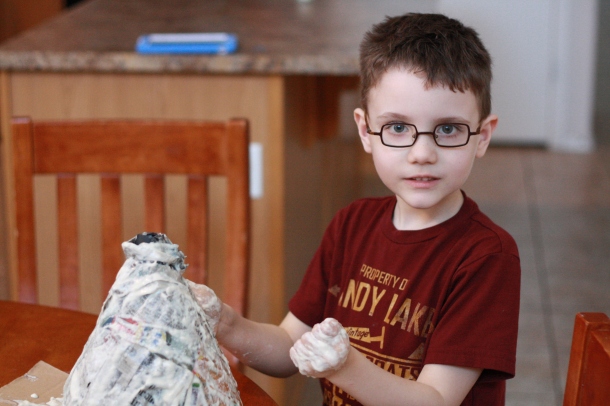 Jackson wasn’t too thrilled with it (it is kind of hard to keep the newspaper from ripping apart when soaked in the mixture), so you can guess who had to build it. It took 3 days to fully dry.

So after waiting and waiting, then painting, we were finally ready. Now, this is what is great about the kit: part of the assignment was for Jackson to figure out the best combination of ingredients to produce the best explosion. He had to play “chemist” and experiment with 4 different recipes.

The first three recipes didn’t produce results you would expect from an explosion. He had to chart his findings and keep moving forward! 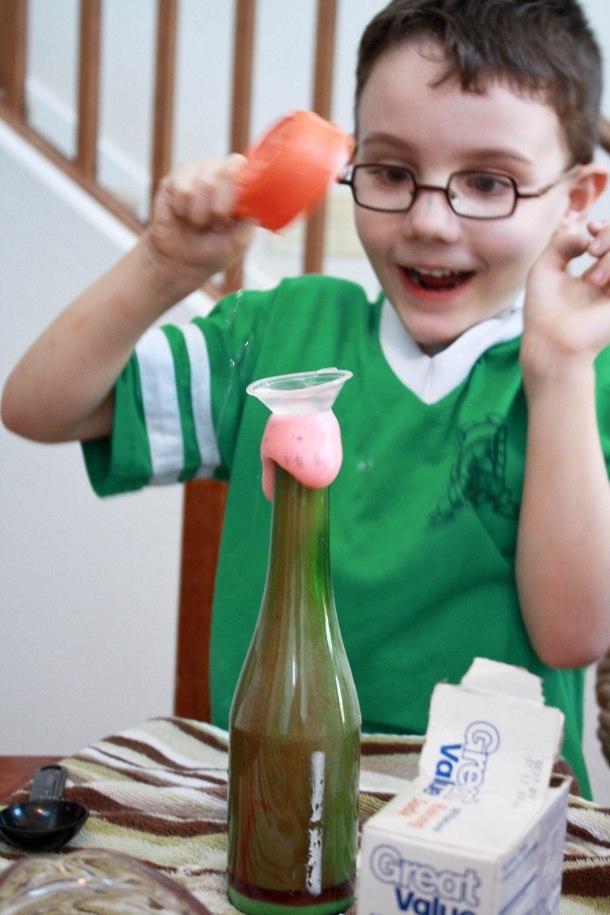 Now that he knew the best formula, he moved on to the main event! 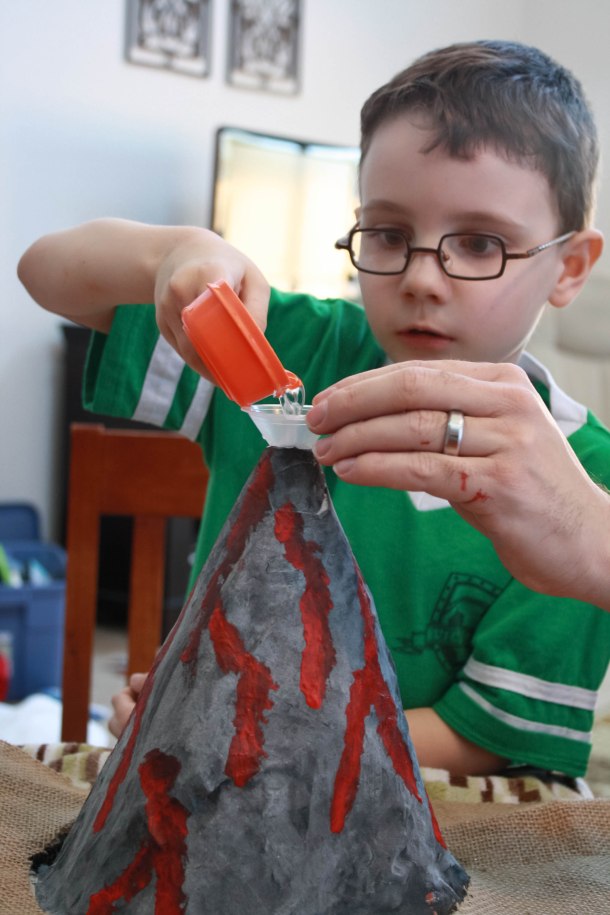 The suspense is palpable… 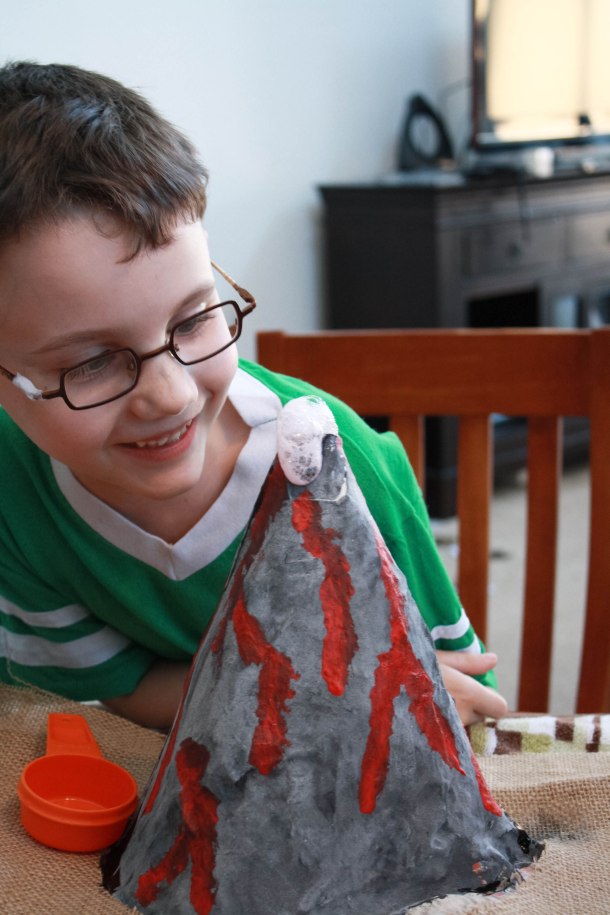 He had a lot of fun with this kit. So much fun, that we went ahead and ordered the next one to finish out our school year. I already have a unit on Rocks that we will be studying for the next two weeks, and then Set 3 will come with units on Minerals, Crystals (he gets to make his own rock candy!), and Fossils.

I highly recommend the Young Scientist Club kits. They come ready to go with almost everything you need to complete your experiments (minus simple items you have readily available at home) and teach the lesson. I just found out that they even have science kits for preschoolers, which I’m going to order for the girls to do next year! The kits can be used again and again (you may have to replace some of the items if they aren’t meant to be used more than once). Even if you aren’t homeschooling, these kits are great to have around for hot summer days when you are trapped inside! Hours of entertainment!

We can’t wait for our next one!

Posted in Uncategorized. Bookmark the permalink.
← How to Eat a Cupcake {featuring London}
Our Home: The School Room →