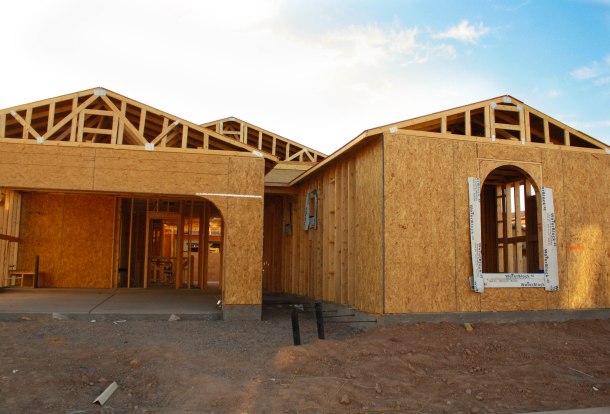 We stopped by the house last night on our way to dinner to check up on its progress. We were blown away! Just a week or two ago just the framing was up, but now we have walls and a roof! All the plumbing has been wired, but not electrical. I was giddy! I just can’t believe how fast its going up. 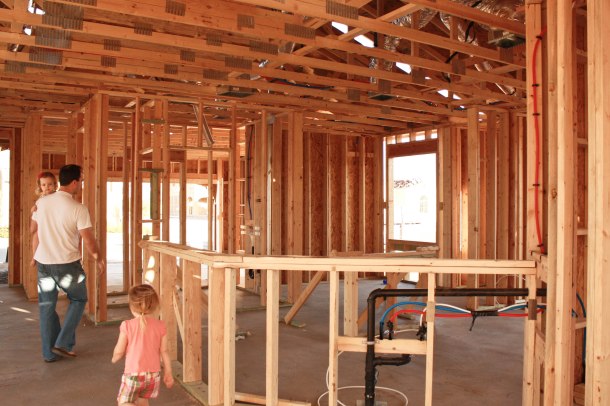 This is a view from our great room looking into what will be the kitchen and breakfast nook (the nook is where you see the window). My sink looks out into the great room (it will be where you see all that plumbing), which I’m really looking forward to. I just love the layout of this house! 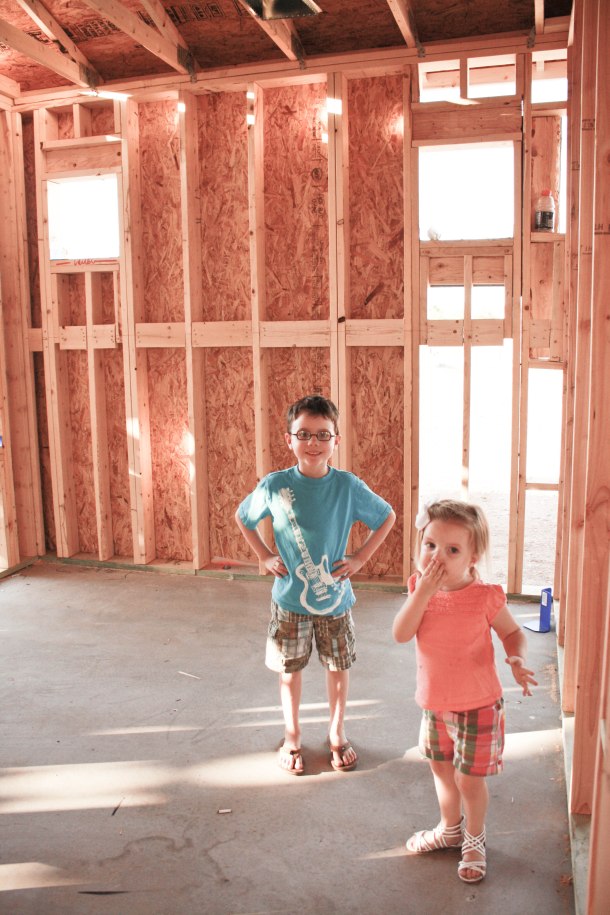 Jackson and London loved running through the rooms. This is Jackson’s room. I think the bedrooms are going to be the biggest space adjustment for us; our bedrooms now for the kids are h-u-g-e, and these are much, much smaller. 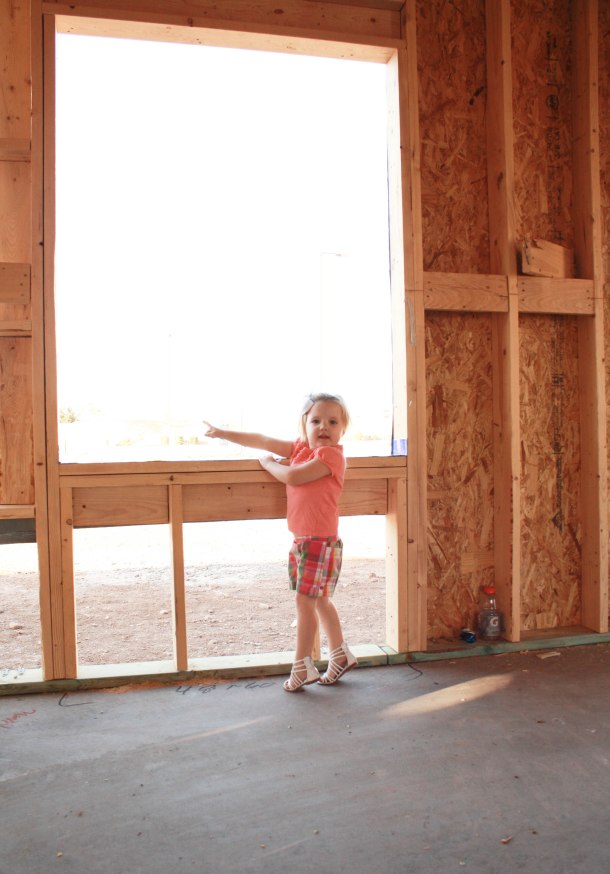 London checking out the lack of view from her window. 😉 The girls will share this room, and it will be quite the adventure. London is super thrilled to start sleeping with Brooklyn! 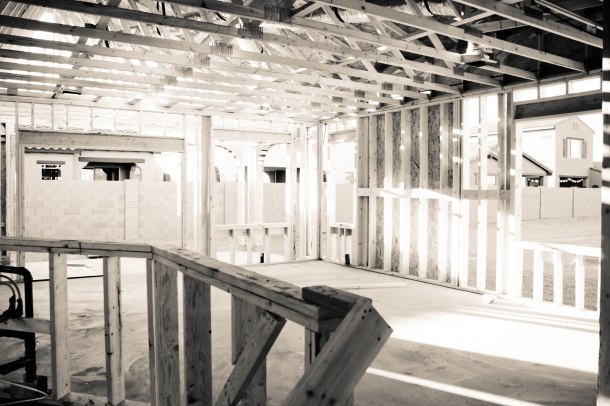 This is the view from standing in the kitchen looking out into the great room. Such a wide, open space. We are losing 700 sq ft by moving into this house, but the layout keeps it from feeling that way. Most of the footage we lost was in the stairs (praise the LORD!), the bedrooms, and the loft that we currently have but don’t use. So, really, we will only feel the sting in the bedrooms. 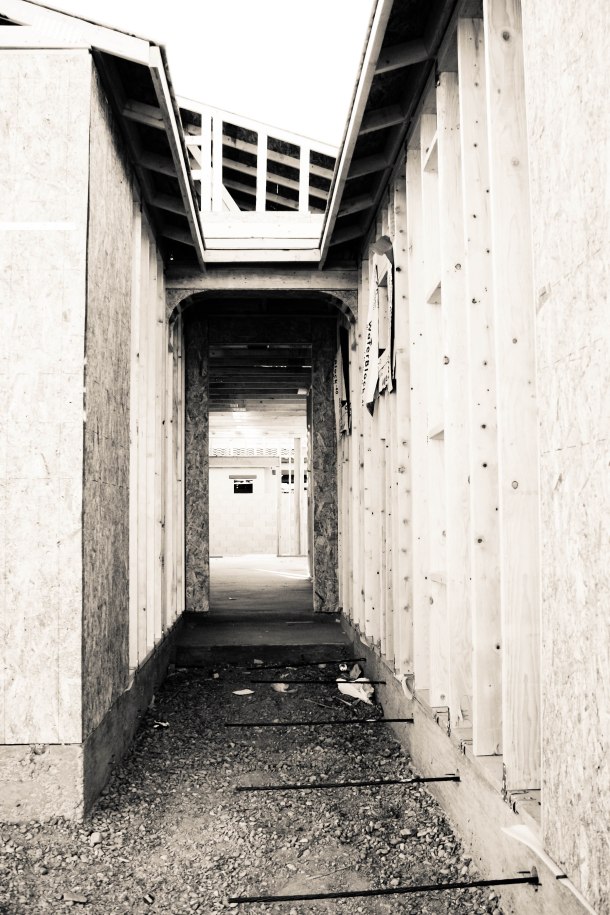 Still to early to hang a “M” and a welcome mat, but here is our front entrance!

There are currently 3 homes occupied on our street, and about 7 going up around us…a few ahead of us and a few that have just been started. I’m hoping that most are almost finished by the time we move in so we can avoid most of the construction hassles (and the port-a-potty that is located right in front of my house, lol!).

We were originally told that we would have an early February move in, but Cachet recently finished a different housing project and moved all their crews to this one, so things are going up really fast. We should get a call for a walkthrough soon, and then an email/call with our anticipated close date. I can’t wait for that date to come in so we have a better idea of timing for our current house. We have so many projects to do, and at the most we have 12-14 weekends to do them (some of those being holiday weekends, which means nothing gets done)!

Which means I should get started. Off to pack a box or two! 😉

Posted in Uncategorized and tagged New House. Bookmark the permalink.

I’ve been lazy about taking pictures and writing blogs.

And, honestly, I’ve been sucked into a few shows. Who watches Parenthood? I swear I’ve cried at every episode. I just finished all three seasons on Netflix. #sogood.

Of course, that show has also created a mild urge to have a 4th child, simply because it looks awesome to have 4 grown up children.

Raising 4 baby children is a different story, however. That’s what I keep reminding myself of, anyway.

Oh, also in the news…stupid iOS 6 wiped my iPhone clean. I lost everything, including all the pictures I had ever taken on it. I have no idea if I backed up to iCloud, because I can’t find them. So, I only have a few pictures to share with you in my ultimate catch-up post. 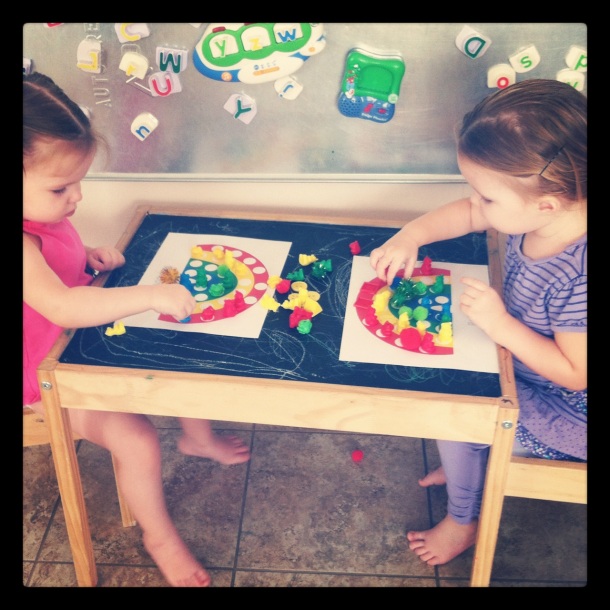 School is going…okay. We’ve hit the October slump, and thankfully last week was Fall break so we got a week off. I’m really hitting writing hard this year with Jackson, and since he DETESTS writing, he now hates school. I keep reminding him of all the stuff he is good at (like Math…he just took his Unit test that covered six weeks of multiplication and he got every single question correct!), but he gets frustrated so easily. Luckily we have some fun units coming up with Halloween {a holiday I despise, but it works well with adjectives, lol!} and the election.

Here are some of the fun units we are doing:

I found this fun little unit on tPt by Jessica Travis.

Cara Carroll is like, my favorite blogger ever. She has so many great ideas, including this one. This unit uses the books Duck for President. Grace for President, and My Teacher for President. I’m really excited to get started on it!

These fun little activities will work perfectly in Election week to use as a part of our Daily Five routine, especially writing and word work. 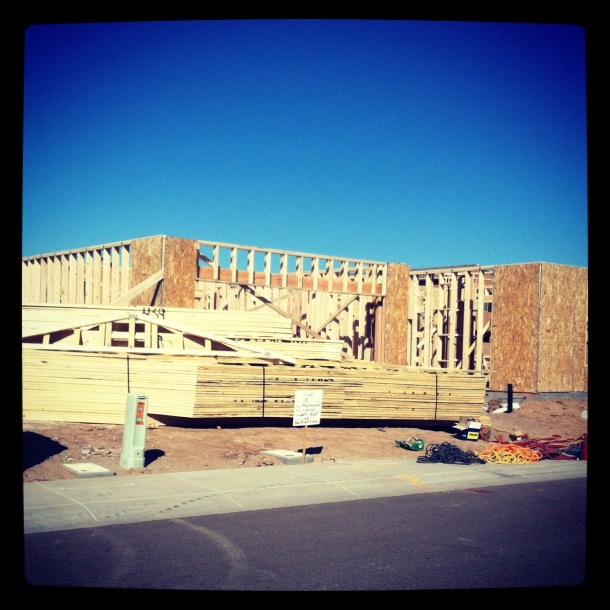 The house is coming along fast! We were there 2 weeks ago and the foundation hadn’t even been laid, and as of this morning most of the framing was up! Our roof is currently in a pile at the front. 🙂 Seeing it UP was awesome! This weekend we did a lot around our current home, like cleaning out the attic, garage, and having a garage sale to start the major purge of junk we have accumulated over the past 3 years. We are having to downsize quite a bit, so we have sold off a lot of furniture. We still have more to get rid of! 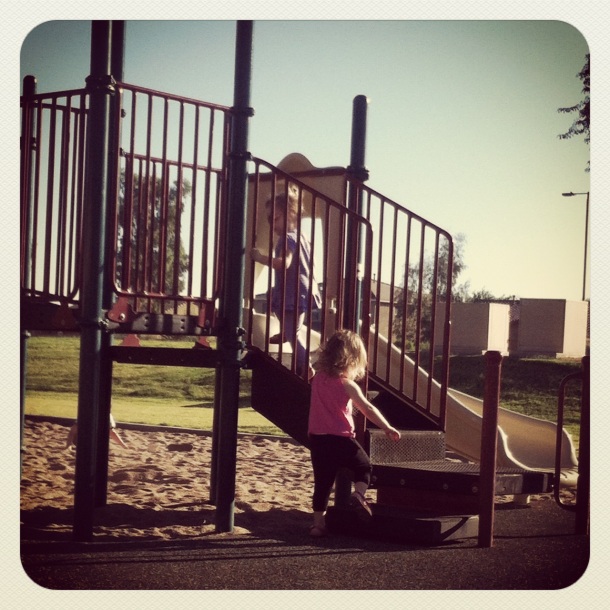 Fall is finally starting to show its face around here. Its now cool enough in the mornings to head over to the playground for some activity time. I was so bummed; a few weeks ago I found out that the soccer league that Jackson was on last year isn’t running this year, so no fall soccer for us! I can’t wait to get out of podunkville and move to where the city actually provides youth leagues!

Major news: Jackson lost his first tooth! I had a picture on my phone, but…arrgh. But, its precious. And creepy. For example, the adult tooth is growing in, which is fine. However, the tooth NEXT to it hasn’t fallen out yet, and THAT adult tooth is growing in, too…right behind his baby tooth! Frightening, really. I’m tried really hard to not get all crazy and worry about the fact that a tooth is growing out of the middle of my son’s mouth. People have been telling me that it happens and when his baby tooth falls out, the adult tooth will just move into place. Fingers. crossed. Perhaps I’m a bit paranoid since I sported a mad, ugly smile for most of my life and would never wish that shame on my children. I think I’m hyper sensitive, lol! Regardless, orthodontics are in his future. I didn’t get braces until I was 26. I had to live with this: 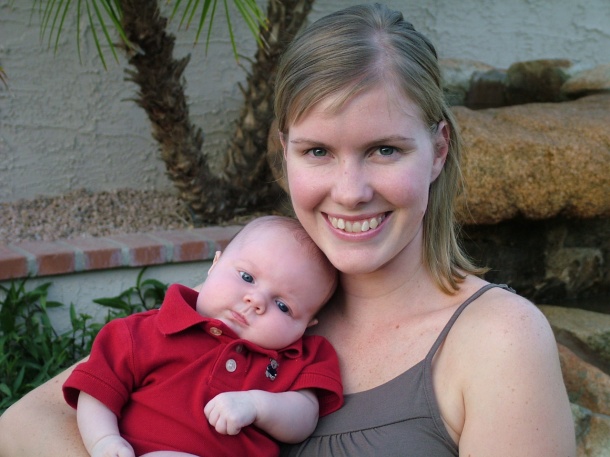 Horrified? Me too. Thankfully, Snaggles has been tamed and everyone is in their proper place after 2.5 years of Invisalign and my obsession with my retainers. {on a side note…precious baby Jackson!!!} 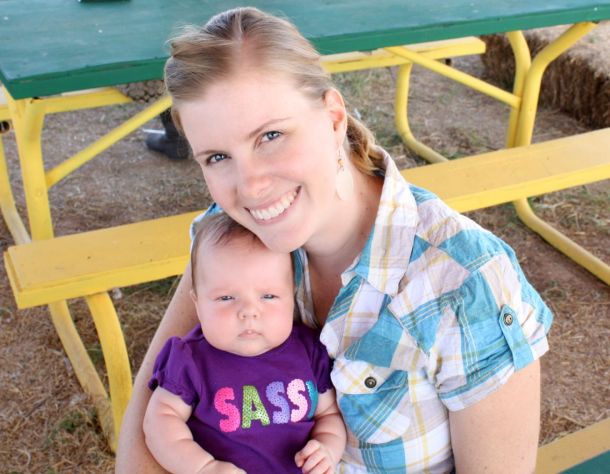 All that to say: my kids will have braces. For. sure. {precious baby Brooklyn!}

AND that’s it. I think. I’ve tried some fabulous recipes lately that I want to share, but I’ll save that for another time…mostly because nap time is almost over and I need to close my eyes and breath for a few minutes before the madness starts again. 5 hours until bedtime… 😉

Posted in Uncategorized. Bookmark the permalink.